A unscrupulous tenant and professional fraudster has accumulated dozens of files concerning several false identities to rent housing and never pay rent, since 1987. Some of his victims even had to declare bankruptcy, in 2011, because of his actions.

Fernando Paredes, aka Fernay Padere, aka Fern Pader, took the audacity to claim damages to the owner of the housing he had rented in Blainville in December 2010, because he changed the locks of the house and taken out all the goods that were there, a few days after his arrival.

It was after learning that this tenant, a social assistance recipient, had used a false name, that he had given false rental references, his credit report, in addition to falsifying his occupation and failing to declare his antecedents with the Régie du logement, that the landlord decided, after consultation with the police in particular, to repossess the rented unit and to store its contents. In addition, an ex-owner, who was robbed by the fraudulent tenant when he left a previous rental unit, was able to recover his property on this occasion. It should be noted that the owner concerned in this case had entrusted the renting of his dwellings to a third party, including the conduct of pre-rental screenings.

Admittedly, it is not recommended for a homeowner to do so and to seek legal advise, if we rely on the provisions in the Civil Code of Québec to that effect. “Unfortunately, the many abuses they regularly suffer from unscrupulous tenants, cause some of them to take action without engaging in long and painful (and often unsuccessful) procedures with the Régie du Logement. All the more because when fraudulent tenants are insolvent, most can never recover their dues, even with the Régie’s judgment in their favor, “explains CORPIQ’s director of public affairs, Hans Brouillette.

The owner was ordered by the Régie to pay $ 1,500 to the evicted tenant who was unable to recover his personal effects, to compensate him for his losses, and the lease with him was declared void.

Check the identity of your prospective tenants

The CORPIQ reminds its members that it is imperative to check the identity of those who sign a rental application, by verifying one or more official documents with the photo and the real name.

This will avoid serious potential problems and protect you from possible lawsuits or, if necessary, from having to act illegally or against the established rules.

The members of the CORPIQ have access to the ProprioEnquiry screening service which allows them to obtain, in a few seconds and at a low cost, credit information on a prospective tenant, 24 hours a day / 7 days a week. Extensive surveys (references of former owners and jobs as well as legal, criminal and files at the Régie) can also be done. It should be noted that the CORPIQ itself verifies the identity of the references given by the tenants. In this case Proprio Enquête would have revealed the true nature of the candidate.

And be careful: Fernando Paredes, or one of his many aliases, is looking for a new home! 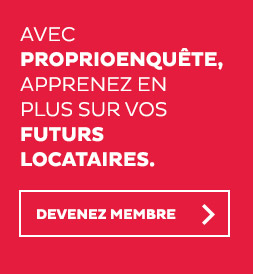